Located to the SW of Paris and reached via the E50 motoroute (refer to Google for more info) the annual “24 Heures Du Mans” auto race is held outside the city of Le Mans in the department of Sarthe. The race starts at 4 pm on the Saturday (June 19th for this year) nearest the longest day of the year. Since this is a 24 hour-long event, the more sunlight the safer it is.

For the 1965 version, the main players were several Ferrari P2 prototypes and gaggle of Ford GT40s powered by 289 cubic inch (4.7 liter) V8 engines of 375 hp. A total surprise was two GT40s filled with 427 cubic inch (7.0 liter) NASCAR-based engines that delivered close to 475 hp. The supporting cast included Cobra coupes, a Maserati and several less powerful vehicles. The most unique vehicle was the Rover-BRM turbine car. This was jet engine powered and a bit on the slow side. But it kept running and finished 10th out a field of 51 starters.

The 427 (7.0 liter) Ford GT40s, as you see them in the slides, had a life of about six weeks. I probably have one of the very few existing color slides of these two vehicles since they were in the public eye only about 4 days. The fins you see on them were added after their first limited practice when they tried to “fly” and showed instability on the straights. They had no prior testing in the U.S. other than limited driving to ensure they would at least stay together. The engines and transmissions were installed with minimal engineering, lightly tested and air freighted to Le Mans in 5 weeks – an amazing speed of delivery. They had top speeds of around 225mph/360kph with near violent acceleration compared to the other cars.

To give you an example of what the drivers and cars accomplished, the lap record had been 3:44 for the 8-mile high-speed circuit. Before both cars failed with broken transmissions by 9 pm, the time had been reduced to 3:22 for an average lap speed of about 145mph/232kph including corners. Phil Hill kept reducing the record until the transmission finally failed. The high torque provided by the pushrod engine was too much. The car-engine combination was gradually improved and won Le Mans several times. The French, not liking such examples of audacious Americanism (BIG engines y’know) eventually limited the max engine size to 305cuin/5.0litre capacity several years later. The regular GT40s had overheating problems with none finishing.

The real trick about this 5-day weekend is that I accomplished the whole thing for US$47
in 1965-type money. I did it as follows;

– My partner (19 and from Kansas) and I started Thursday morning with a military
shuttle bus from Frankfurt/Main to Wiesbaden Air Force Base.

– Fly to Laon, France on a T-39 Sabreliner executive jet – the Air Force pilots
needed some air time so they took us where we wanted to go.

– It was also Paris Airshow weekend (surprise to me) so Paris had no spare rooms.

– USO found us a small suite in the Montmartre quarter and we split the cost
with two US Air Force types from a Turkey-based radio listening base. I asked
how far can you hear north into the USSR? The response was “rock-and-roll
songs from Anchorage!” My Montreal inflected French helped us get around
somewhat.

– Friday was to the Paris Air Show where we got in free because we were NATO.
The Air Force types went with us but we split up at the show.

– Friday night late train to Le Mans. Shared a compartment with a Frenchman and
a Brit going to the races. As we were leaving the train I asked how my French
was – I had lived in Montreal for two years as a 7-9 year old. He said I sounded
like a farmer from the south of France. We all laughed.

– Saturday – the Brit guides us to the race track via buses. And then showed us
how to jump the fence. Later he had to talk to a ticket collector and we each got
in for 1/3 of the normal ticket price. We were located DIRECTLY above the
GT40/Cobra pits and 12-20 feet (4-6 metres) from the action. I could almost tell
what size wrenches they were using. Slept on the ground using our military field
gear.

– Sunday afternoon – train back to Paris. Train to Laon. Duty bus to the air base.
Late supper in the chow hall and used transient barracks for the night over.

– Monday – C-130 Hercules cargo plane to Wiesbaden. The plane was delivering
an engine to Berlin for another C-130 which had to replace a blown engine. They
landed in Wiesbaden just for the two of us. Talk about service.

– Duty bus back to downtown Frankfurt/Main and catch the trolley car back to our
Kaserne.

What an adventure – my young travel partner was amazed with what we did. This was
his first real trip without Mom and Dad much less out and away from Kansas. I am sure I
could never have repeated the trip for a similar cost. There were just too many things that
fell into our laps.

By the way, I am still ticked off. I found out later that there was a military shuttle from
Paris to Le Mans that would have been free. I could have saved the $15 train fare –
bummer. But we would have never met the Brit and had him guide us. It ended up being
a wise expenditure.

I finally got around to writing this in September 2008 at the retired age of 65 1/2. 43 ½
years have snuck past me but I still remember. What a great weekend.

This article and Photos are available for re-publication as long as proper credit is given to Larry and links back to this site and page are included. if you are interested please contact us to request photos via the contact page.

Photos below are not in final order yet. 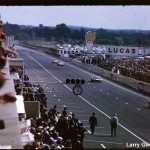 This site uses Akismet to reduce spam. Learn how your comment data is processed.

Donations will be used exclusively to pay the cost of keeping this site online.